A pair of goals in the final three minutes of regulation spurred an unlikely comeback by Team Bahamas at the 2021 CONCACAF (Confederation of North, Central American and Caribbean Association Football) Beach Soccer Championships at the Complejo Deportivo Fedefutbol in Alajuela, Costa Rica, on Monday, but they lost to Guatemala in penalty kicks. Daron Beneby got the comeback started with a fantastic header in the 34th minute for Team Bahamas, pushing the ball past Guatemalan goalkeeper René Castro on an inbounds pass, bringing them to within 3-2. Just two minutes later, Gary Joseph found the back of the net for The Bahamas, pushing the ball to the lower right corner of the net past the outstretched arm of Castro. With just 40 seconds remaining in regulation, Joseph darted through two defenders and drilled a shot past Castro. Neither team was able to score in the final 40 seconds or in the three-minute extra session, but Guatemala put The Bahamas away, 3-1, in penalty kicks.

“We started well but small mistakes late in the game cost us. We feel like we were in control late in the game, but they capitalized off our mistakes and won the match,” said Team Bahamas head coach Luiz Escobar, of Brazil.

“We never gave up. We fought hard to the end and gave it our all. We got kind of unlucky at the end of game. It’s frustrating, but we just have to understand what worked for us today, the strong points, and come back tomorrow and use them to our advantage. Tomorrow is a different day. We’re coming out to play hard and we are looking to win.” It doesn’t get any easier for The Bahamas as they face the Dominican Republic at 1:30 p.m. today, and the top seed in the group, El Salvador, at 3 p.m., on Wednesday. Just the top two teams in the group will automatically qualify for the quarterfinals which get underway on Friday. The top two third-placed teams from groups ‘A’, ‘B’ and ‘C’ will also move on.

“Overall, it was a good performance for us,” said Team Bahamas defender Gavin Christie. “We feel like we controlled the game but unfortunately, we made one or two mistakes which really cost us. We came back and tied the game but fell short in penalty kicks. This is a tournament of multiple games and there’s nothing we could do about the loss right now. We just need to keep our heads up, come back, and play hard tomorrow. We still have a good chance to move on. We feel confident in our chances.”

Guatemala struck first in the group stage match yesterday, getting on the scoreboard with a goal in the 12th minute of the game from Juan Flores. That goal came with just 13 seconds remaining in the first third. Guatemala went ahead 2-0 on a shot from Wilson González in the 22nd minute of the game. The Bahamas finally got on the scoreboard as Kyle Williams got a favorable bounce on a penalty kick with just 16 seconds remaining in the second period. The Bahamas tried valiantly to get an equalizer, but a tough Guatemalan team held them at bay and appeared to put the match away with another goal from González, this time in the 34th minute as he found himself all alone in front of The Bahamas’ goal. He bounced the ball to himself and then pushed it past Team Bahamas goalie Michael Butler to give them a 3-1 lead with just 2:21 remaining in the game.

However, just 11 seconds later, Beneby rose for a header off an inbounds pass from Timothy Munnings and diverted the ball past a diving Guatemalan goalkeeper for a fantastic goal. The Bahamas continued to push forward, getting the equalizer from Joseph just 40 seconds before the end of regulation. After a scoreless extra session, Guatemala got goals from Wilson and Miguel González in the penalty shootout along with another goal from Ángel Sáenz. Julmis Wood scored on the first penalty kick for The Bahamas, but Joseph’s shot was blocked. The Bahamas will play the Dominican Republic today and El Salvador tomorrow. The top two squads of the 11-team tournament will qualify for the 2021 FIFA (International Federation of Association Football) Beach Soccer World Cup, set for August 19-29, in Moscow, Russia. 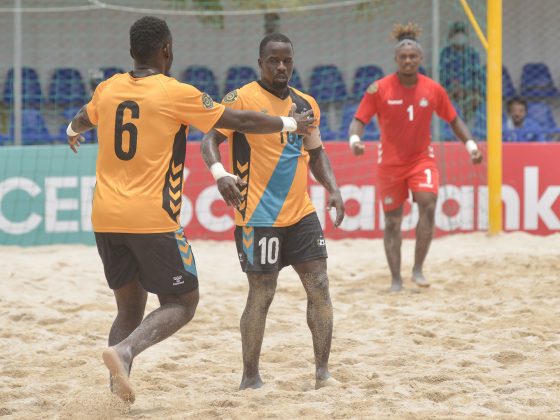 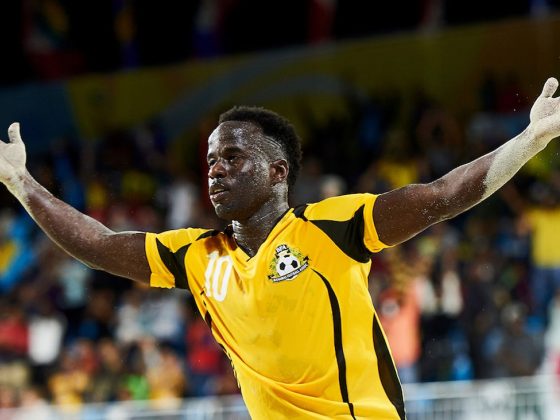 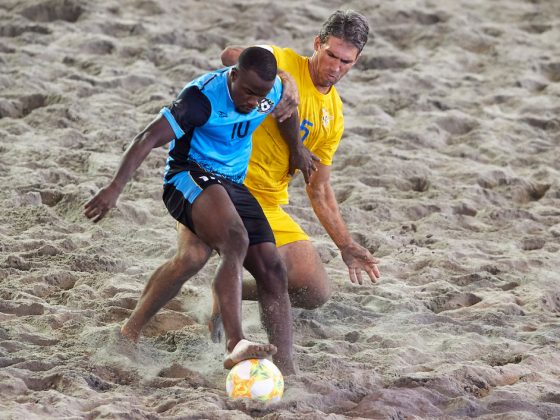 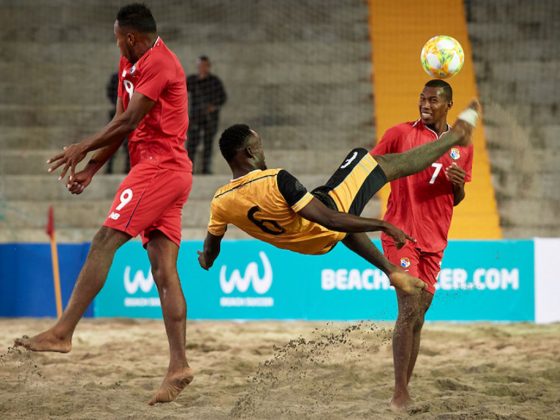